Notes: There are 4 main segments highlights in this program:

Elliott Mintz, legendary underground late-night host in the ’60s & early ’70s, on KPFK’s Something’s Happening, about calling to Embassy in Tehran to the kidnappers during the Iran Hostage Crisis, John & Yoko, and the times.  He is known for his work on The U.S. vs. John Lennon (2006), Headshop (1971) and Imagine: John Lennon (1988).  In the 1970s he became a spokesperson for John Lennon and Yoko Ono, and took on many other A-list musicians and actors as clients. On KPFK he spoke to the ’60s youth and their issues.

How the ‘Grim Sleeper’ got away with killing L.A.’s black women

A former garbage collector, Lonnie Franklin Jr., goes on trial in June for 10 murders. But did the Grim Sleeper kill even more?

It took 30 years before America woke up to what Margaret Prescod was yelling about.

For three decades, the black activist had been raising the alarm that someone was killing black women in South Central Los Angeles and no one listened — not police, not prosecutors, not anybody in power.

At local rallies and protests, Prescod had screamed

“Black lives matter” decades before a police officer shot Michael Brown in Ferguson, Mo., last year, and before teenager Trayvon Martin was gunned down by a white man in Florida in 2012.

Prescod estimates at least 200 African-American women are missing and as many as 100 have been killed on the streets of South Central, an impoverished, gang-ridden part of Los Angeles.

Outrage erupted in the black community when it was rumoured police had labelled the crimes as NHI — “no humans involved.”

“This is a community of colour. A mainly black community, increasingly Latino, but certainly when these murders began it was a predominantly black neighbourhood,” says Prescod.

Women’s rights activist Margaret Prescod seen at a 2008 news conference. She campaigned for years for authorities to do more to find the Grim Sleeper.

“There was, recently, a young white West Virginian college student who went missing and I can tell you, there were daily updates on Google News, on all the major media outlets about her. But how is it possible that you can have this many women missing in South Central L.A., in a relatively small area, and it seems not to matter?” Prescod says.

“I’m not putting down the investigation on the white West Virginian woman. She had a right to that. But so did these women. . . . These women weren’t all school teachers or nurses. The mantle of respectability was kind of ripped off, but what does that matter? These are someone’s daughters and sisters.”

Tons of historical info-not sure yet how to access. 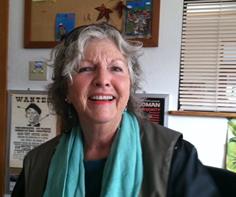 Adi Gevins is a San Francisco Bay Area-based radio documentarian who has been referred to as the “fairy godmother of community radio”.[1] She has won an Ohio State Award[citation needed], an American Bar Association Silver Gavel[citation needed], numerous Golden Reels from the National Federation of Community Broadcasters[citation needed], and two George Foster Peabody Awards[citation needed] (with Laurie Garrett for “Science Story” in 1978, and with SoundVision for The DNA Files in 2000), considered the highest accolade one can receive in journalism.  Much of her work has been done for the Pacifica Radio station KPFA in Berkeley, California, including “One Billion Seconds Later”, which won the Ohio State Award and “Me and My Shadow”, a documentary about Cointelpro‘s infiltration of the New Left. She served as executive producer for the celebrated public radio documentary series, “The Bill of Rights Radio”.

Kris Welch Day is coming up in Berkeley.

They dropped their tape into KPFK’s dumpster, prompting an 8 1/2 hour LAPD search of KPFK for tapes, and jailing of manager Will Lewis for refusing to turn over the tape/s.

The classic anti-anti-hero of radio:

Excerpts:  ….”With Dubya in the White House in 2005 and U.S. ground troops occupying Iraq, the political left flooded the streets in protest. KPFK’s anti-war bent stood out in a media landscape too busy genuflecting before a modern-day Moloch demanding sacrifices of youth on the battlefield.”….
….”The economic devastation has listeners looking for alternatives and KPFK is trying to find new ways of being able to stay on-air to deliver them. Just like the anti-war movement energized the station ten years ago, the current moment holds the possibility of it connecting with the disaffected.”….

KPFK’s Community Advisory Board (CAB) is the local group mandated by the Corporation for Public Broadcasting charged with assessing and reporting the needs of the community served by KPFK to the governing board and management of KPFK.  The purpose of the needs assessment is to help inform the governing board and the station management about ways our community radio broadcast can better serve the community through programming. Members are appointed by the Local Station Board, but participation is open to all community members. Meetings are held at least quarterly and often monthly at the radio station or in a neighborhood of our signal area. Meetings are noticed two weeks in advance of the meeting date, and are open to the public.  KPFK’s Community Advisory Board meets on Saturday, May 2, 2015 11:30 AM PT and is open to the public.  For more information about CAB email Dave at cab@kfpk.org

Average Monthly Costs: These are very close estimates based upon the past 5 months

It costs us over $7 a minute just to be on the air.  Doesn’t sound like much?

And shows Studios B and C

Below are some of my musings, taken from a private e-mail to a KPFK activist of long standing.I am a marginal KPFKer (although I do send them a little money monthly and listen to Ian Masters and a few other things somewhat sporadically). So my ideas may be ignorant or less than fully informed. But I have an idea and a question that may interest you. First the question:

Could (and I mean ‘is it financially and legally possible for’) KPFK [to] separate itself from Pacifica and own and operate the station independently, as an LA based foundation? I have gotten the impression in recent years that Pacifica Foundation has been overrun by people who have no realistic understanding of what it really takes to operate a public media resource. Maybe divorce is the best course of action. It’s pretty obvious, though, that this could well be either legally or financially completely impossible (or both). Ironically, the situation, from my outsider perspective, looks the opposite with regard to KPFA, where it was the relative sanity of Pacifica that had to deal with local lunatics who literally wrested physical control of the station, Cuba revolution style, despite having been voted out of power. (Do I have that right?) That kinda thing just won’t work in 21st Century corporate America. They’ll send in cops and take it back, eventually. And once that happens, it will be lost forever. *
And my other idea is this. We live in an oligarchy. We all know this. The rich control the resources, and without them, ordinary people have to struggle valiantly but will often lose anyway. As it applies to electronic media: but for the Joan B. Kroc Fellowship (you know, the one that created a nation of McRadio Stations), NPR probably would have been totally eviscerated by the Republicans and by its own special brand of infighting over scarce resources (instead of becoming simply a fourth mainstream propaganda outlet with all of her money, to which I imagine very significant strings were attached). (Personal note: I used to listen to NPR. Now, apart from “Wait, Wait, don’t tell me,” which I sometimes leave on on a Saturday morning, I can’t abide them. I haven’t sat through an entire hour of Morning Edition or ATC, even when traveling where there was nothing else on the car radio but Top 40, in years and years. Even Teri Gross is too much for me. It’s the sanctimony, partly, not to mention the CNN-like refusal to actually confront issues or call out lies. Even MSNBC does a better job).
So what about appealing to people like Pierce Brosnan, Richard Gere, hell, even George Lucas or David Geffen, to endow a reorganized and rationalized Pacifica foundation? It seems that the community funding model is finally failing, in this age of the disappeared middle class. There are a lot of relatively Progressive, very rich people in Siliconia and the LA Film/TV world. Some of these people, like Spielberg & Geffen who tried mightily to save the LA Times only to be outbid by a crooked and evil corporate raider (Sam Zell)– who would love to have some kind of public affairs legacy permanently associated with their name. Even if it meant calling it the Lucas Pacifica Foundation or some other horror. Might have to swallow that. If, and only if, actual independence could be written into the deal.

It would be a terrible tragedy to see Pacifica, and especially KPFK, lost to the media raptors. I’m sure Comcast would love to have a 100,000 watt FM station in L.A. But the current situation is so clearly unsustainable that people are going to have to sacrifice some sacred cows and make some major changes if the institution is to survive. One of those sacred cows could be the cumbersome governance, and another may be that there would have to be a somewhat more uniform standard of professionalism and “objectivity.” I know that’s a landmine, but the fact is that many people perceive KPFK and especially KPFA to be powerful radio stations mostly dominated by people in the near lunatic fringe. My experience is that that is far from true (usually), but that IS a common perception among the hordes of Hillary supporter types. And they MUST be part of KPFK’s audience or the station can’t survive.

BTW, requiring quota of returned listener ballots is NOT efficient governance. I would suggest democratic election of a board by the volunteers, which could be anyone who ASKS to be included; and the winners would be determined by straightforward vote counts, not complicated formulas no one understands and which cause people to just not vote so that particular motivated interests get undue representation.”

I’m not sure which struggle you’re referring to when you said that ‘Pacifica’ wrested back physical control of KPFA.
In the most recent struggle, last St. Patrick’s day, a year ago, the fired exec. dir. occupied the National office using bolt cutters.
There is a contentious and very narrow margin of control of the Pacifica National Board.  Close to half support each side and claim legitimacy of control.
So which side do you mean by Pacifica and by ‘local’.
I have always urged that National control should be limited to almost nothing, without affect.
Maybe things are so dire now that something will happen, but I don’t know what.
We need a Gorbachev maybe.’ Sue Cohen Johnson