ADAMS AND ROEBUCK MINUS ONE 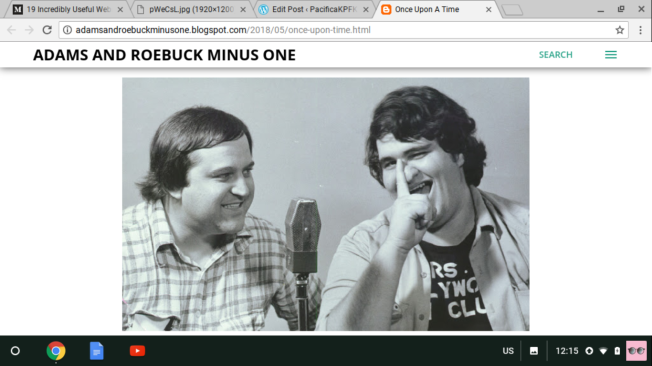 In March 1972 one young guy (Joe Adams) headed in to KPFK in Los Angeles after wrapping up his swing shift warehouse shipping clerk job, to help answer phones for their on-air fundraiser. When he walked into the phone room there were a bunch of people answering phones and another almost-as-young guy (Gregg Roebuck) was already there and answering phones.

It was Monday night. The on air-talent named Rick Bralver, one of the DJs in the after-midnight slot dubbed “NightAngels,” ran into the phone room to ask if anyone wanted to come up to the control room and go live on the air with him. The two guys did.

It wasn’t anything spectacular. They chatted, passed a joint, and cracked wise. Like y’do. The two realized they were both fans of Bob & Ray, Firesign Theater (who had started on KPFK), Lenny Bruce (who had not), and other contemporary subversive comedians of the day.

The next night, another member of the NightAngels did the same thing – Bruce Gossard. And the same two were joined by two more phone answerers. Phil Tuttle, a guy going for his First Class FCC license and a career in broadcasting and a young drama student named David Arias. They chatted and cracked wise. A good time was had by all.

The next night they were not asked to join the NightAngels on the air (Captain Midnight, Steve Tyler), but the next night the following NightAngel, Tom Sanford, did. And the Next night “Jason B. Good” asked them to join again and invited them to be part of the regular Saturday night NightAngels shift dubbed The Heavenly Miracle Air Experiment.

They did and the four dubbed themselves “The Sunday Gummies,” because Saturday midnight was actually Sunday Morning, and one irate listener was annoyed with all the cracking wise had called in to growl, “You gonna’ play music or gum all night?” To which Gregg Roebuck snarled, “We’re gonna Gum, how you like that?” And the Gummies were born. Phill Tuttle left to run a station in Kingman Arizona, and a friend of David’s, Cheryl Branson, joined them on the air, and another woman, Cheryl Jacobs, joined them.

It only lasted about a year, but we had fun. The Gummies wen their separate ays, but Joe and Gregg stayed to become the Mondy Gummies (after N’Wana Davis’ Music Black and White after midnight show), and stayed in the after Captain Midnight slot on other nights, first as the Sunday Gummies but eventually as Adams & Roebuck.

Things changed and David Arias is now David Arias-Rios who has been the morning man on KOMO in San Antonio, and I am retired and living in Raleigh, NC. Barbara is still around, but I have no idea where Phil or Cheryl are.

It’s been a few years, but with the Gummies Gregg and I began a long trek as friends and performers on radio, as stand-up comedians at the Troubador and the Pasadena Ice House open mike nights. We discovered I hated being seen on stage, and Gregg loved it. I went to out of sight positions s writer and director for radio theater and stage in Hollywood, and Gregg as a performer on radio drama, stage, commercials, and television (“Charlie” in the last season of GRACE UNDER FIRE).

We shared a couple of houses together. With David L. Krebs we did shows together as teachers for the American Radio Theater and short-lived NewRadio commercial radio drama Project. We did stage together and even quit drinking and drugs together. Some people suggested we were lovers, but we were never sexual with each other. He was my brother, and a bit more.

And I am finally to follow through with something he wanted to do before he died. We talked about using the internet to do a new incarnation of the old Adams and Roebuck show. And he died and I couldn’t even listen to the old shows that had survived.

Time heals and I was able to look at the idea of doing something with what he wanted, and one of the people who was there in the middle of the KPFK years, Ed Hammond, made the perfect suggestion for the new project. Me alone equals “Adams and Roebuck Minus One.”

I’m thinking – Podcast with the old comedy we used to play, little excerpts from the old shows, sides of comedy music and bits, just like we did before. But Gregg isn’t there. From 30+ years of collaboration and knowing each other, I don’t think he’s floating around – looking down and smiling.

But I think it can honor him, and honor is something the living do in name and remembrance of those who have based beyond.

It will take a while to get the show up on its legs, but it begins with a concept and a name. And a desire to honor my gone brother and funny, funny man.