Joseph K. Adams When I was there, we had a village. We shared meals, some lived with each other, some brought food to the station (some Johnnie Otis buffets were intense), did picnic jaunts to the old zoo at Griffith park, met in the conference room to talk about programming, episodes of upcoming shows… even when you didn’t agree with someone, there was respect and communication.

Re: Johnny Otis- “I think he was earlier than that [’78]. My first time in the new building was March, 6th or 7th of 1972. I had been at the old building before that, but Johnnie and his clan were there when I arrived. I know because they always brought LOTS of food down to the studio, and Shuggie was only about 14. But I have to say I don’t really know his tenure… Wikipedia says he was on KPFK in the 1980s, but I stopped being a programmer at K by 1978, and Johnny (that’s how Wikipedia spells it, but I thought it was spelled the other way – for many years) had been on for years by the time I was leaving.
I think the only connection I had …was a couple of guest spots I did for Roy – the last being about 2 weeks before the 1989 quake in San Francisco. ’78 sounds about right…  I came back from Phoenix after a failed relocation to find Chapel Perilous on the air….I was really very happy to find that when I came home with my tail between my legs, my work was being appreciated.
I haven’t tuned in for him for a while – is Something’s Happening still a going concern?
Don’t be too surprised at the events at K – when people show up, form a community and create something of value, cons and scavengers try to get what they want from it, even if it means the thing they are raiding dies.
On the other hand, it becomes a Golden Age we got to experience. People don’t believe me when I talk about my regular interactions with Harlan Ellison, Ray Bradbury, John Hartford, Roz and Howards parade of musical guests, Hour 25’s parade of writers, newsmakers of ‘the day’ and the things that were just going on… they think I’m delusional. But not about THAT.
I knew KPFK when it wasn’t painful. 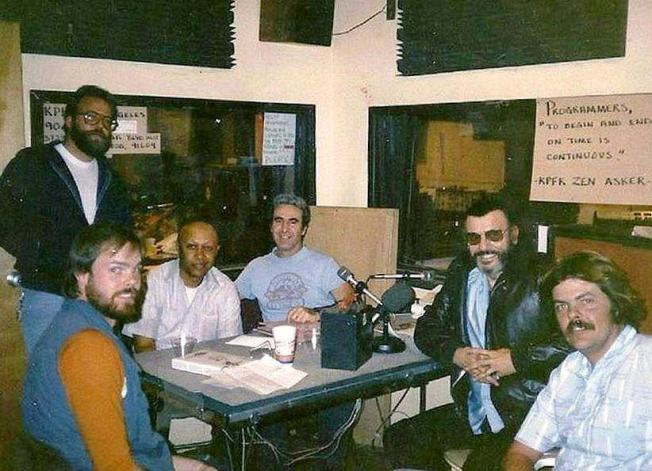 Joseph Kessler Adams
Author of CLIMBING THE SPIRAL MOUNTAIN, SONG OF ORPHANS, NIALL’S DREAM, THE MAMA LAW, FEVER, ASSASSINS, and LIVING IN THE HOUSE OF ANGELS. Available in paperback from Amazon, in ePub from Kindle, iBookstore, Nook and Kobo.

To post here, let me know, I'll put you on the list. Other pages include other interests of yours truly.
Join 38 other followers